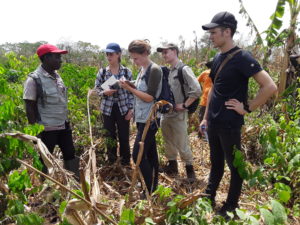 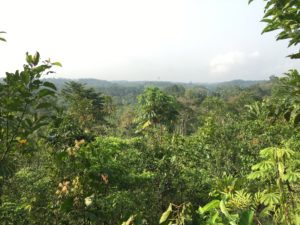 The rationale. Pioneers are the first plant species to establish during forest succession. By forming a first canopy layer they improve microclimatic conditions, thus paving the way for the establishment of other species. It is not clear how pioneers are able to cope with the extremely hot and dry environmental conditions. A clue may be find in their hydraulic traits; how do plants take up, transport, and use water? Insights into hydraulic traits may allow to better understand under what conditions pioneers are able to establish, and to improve species selection for restoration activities.

Aims. This study aimed to understand how pioneer species from dry and wet tropical forests differ in their hydraulic traits.

Implications. Tropical pioneer species and secondary succession may help to restore landscapes naturally and combat climate change. To enhance the success of restoration programs in dry environments, drought tolerant species can be selected that have a high wood density and a high absolute leaf water potential.

Coen van den Brand graduated in Forest and Nature Conservation. He is interested in restoration of tropical forest landscapes, co-organized the FEM restoration sessions, and currently works as a forestry consultant. 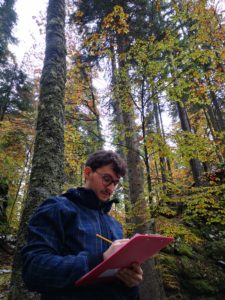 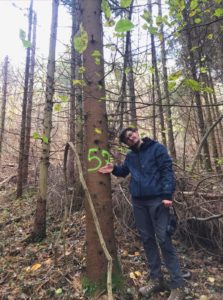 Why traits? Plant species differ tremendously in their characteristics (i.e., ‘traits’). To design efficient forest restoration strategies, insight is needed how species vary in their traits, and how that allows them to become successful in a specific environment.

Implications. To increase the diversity and resilience of restored forests, a mix of species with different trait values could be selected for mixed species plantings. Native and pioneer species have widely shown to be successful in forest restoration. If carefully selected, additionally species with different traits values can be included, such as late-successional species or exotic species. Late-successional and exotic species have larger seeds, and therefore a larger establishment success than native and early-successional species. At the same time they can bring several benefits to the ecosystem. Because of their fleshy seeds they can attract frugivore seed dispersers. They can shade out herbaceous weeds, may act as nurse trees for the establishment of other species, and provide forest products and resilience to environmental change.

Edoardo Nevola graduated in  Forest and Nature Conservation from WUR. He is interested in forest ecology, and is currently working at the University of Milan on forest carbon storage. 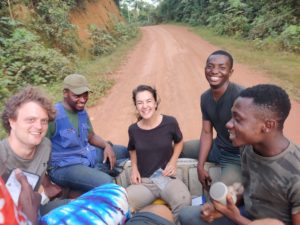 The rationale. Agricultural expansion is a main cause of tropical deforestation, with loss of biodiversity and ecosystem services and increased global carbon emissions as a result. With the abandonment of the agricultural fields, secondary succession is allowed to set in, forming secondary forests through natural regeneration. These tropical secondary forests are valuable as a carbon sink, but may also aid in biodiversity recovery and ecosystem provisioning. Secondary succession is thought to be driven by the land-use history, but it is also influenced by the landscape context: the structure and composition of the surrounding landscape that provide seed sources and habitat for dispersal agents. Discovering the effects of the surrounding landscape on forest recovery may grant a valuable insight for restoration purposes.

Aims. The aim of this research is to identify the landscape attributes that affect secondary tropical dry forest regeneration after land abandonment.

Implications. This research indicates that natural regeneration can be a viable method of forest restoration, with secondary forest in the direct neighbourhood serving seed source and as adequate disperser habitat. Future restoration projects should not only focus on preserving mature forests, but should also consider mid-aged secondary forests for restoration efforts

Jules Koppen graduated in Forest and Nature Conservation with the Management track. He now works as a project coordinator at IUCN NL. 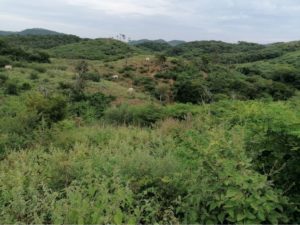 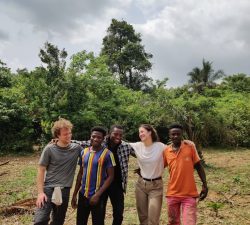 The rationale. Abandonment of agricultural and pastoral lands leads to the emergence of young, secondary forests in the tropics. The land use history generates variation in forest recovery and therefore to the ecosystem services these regrowing forests provide, such as carbon sequestration or biodiversity conservation. The first years of succession are the foundation for the subsequent successional developments and it is essential to uncover how land use prior to abandonment affects early forest succession.

The aim. This research evaluates how management practices during agricultural and pastoral use affect subsequent secondary forest recovery on abandoned fields in a tropical dry forest in Southern Mexico.

The approach. Semi-structured interviews with farmers and landowners were conducted to define each site’s land use history. In 14 abandoned agricultural plots trees and different growth forms were measured for their size and identified to species. 13 Forest recovery attributes were assessed related to growth form composition, forest structure and diversity, to find potential relationships between land use history and forest recovery.

Implications. The use of heavy machinery is the most influential management practice, affecting almost all forest attributes negatively. When natural forest regrowth is intended after land use, then farmers are advised to constrain from using machinery as far as possible and feasible. With the eye on natural regeneration, dual land use proves a tenable practice and burning is potentially a tolerable alternative for land clearing instead of using machinery. The incorporation of fallow periods is beneficial for recovery of forest diversity and should be encouraged. The previous application of these practices can serve as proxies in nature restoration efforts to identify those abandoned sites where assisted natural regeneration is needed.

P.S. Due to covid-19, my fieldwork could not be conducted in Mexico. Luckily, I got the chance to perform similar research in Ghana, which resulted in the most amazing and educational experience. 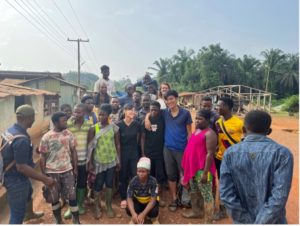 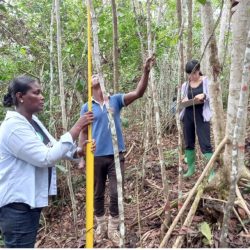 The rationale. The area of tropical dry forests is decreasing rapidly because of land use conversion, but forests have also the potential to regrow naturally on abandoned lands. The secondary succession starts with the regeneration of tree seedlings and the pathway of succession is determined by three interlinked factors (stand age, stand structure, and environment).

The approach. In 19 plots aged from 0 to 6 years, stand structure (basal area, height variation, and crown area) and regeneration factors (growth form composition and seedling diversity) were measured. In each plot, a sensor was established to record temperature and soil humidity. Soil samples were taken to quantify bulk density and soil fertility. Light intensity was measured at 1 m above ground in each plot.

Because the establishment of forests in the early stage occurs rapidly and trees can outcompete herbaceous species along with the change in environment, nature-based forest restoration can be carried out. The change in soil factors and seedling diversity was not driven by the change in stand structure or microclimate and is supposed to proceed rather slowly. Therefore we should assist the natural regeneration by ensuring there is sufficient forests nearby that provide seed and seed dispersal agents.

The rationale. Human-induced climate change has increased the frequency and intensity of droughts worldwide. This may increase tree mortality and affect species distribution and diversity, both in dry and wet tropical forests. Therefore, there is an increased need to better understand the hydraulics and drought responses of tropical forests. Hydraulic strategies, characterized by different hydraulic functional traits, determine tree water use and drought resistance. Species may be either hydraulically efficient, or hydraulically safe, due to a tradeoff between a high xylem conductance and cavitation resistance. Furthermore, species may be drought tolerant, characterized by a low turgor loss point, or drought avoidant through shedding their leaves during the dry season. These hydraulic strategies have been found to be driven by differences in precipitation. However, recent research revealed high cavitation resistance to be associated with a low soil phosphorus content. This suggests that hydraulic strategies might have evolved to tolerate harsh growing conditions in general.

Aims. My research is aimed to find out how hydraulic strategies are determined by climate and soil properties.

Approach. My approach is to create an extensive database from several hydraulic traits of trees across the pantropics, focusing on the cavitation resistance (P50) and the turgor loss point (Ψtlp), by collecting available data from published studies. Climatic variables and soil properties are largely gathered from global databases.

Implications. This study will contribute to understanding the complex interactions between the climate, soil properties and tropical tree hydraulics, which is essential for conservation and restoration of tropical forests worldwide.